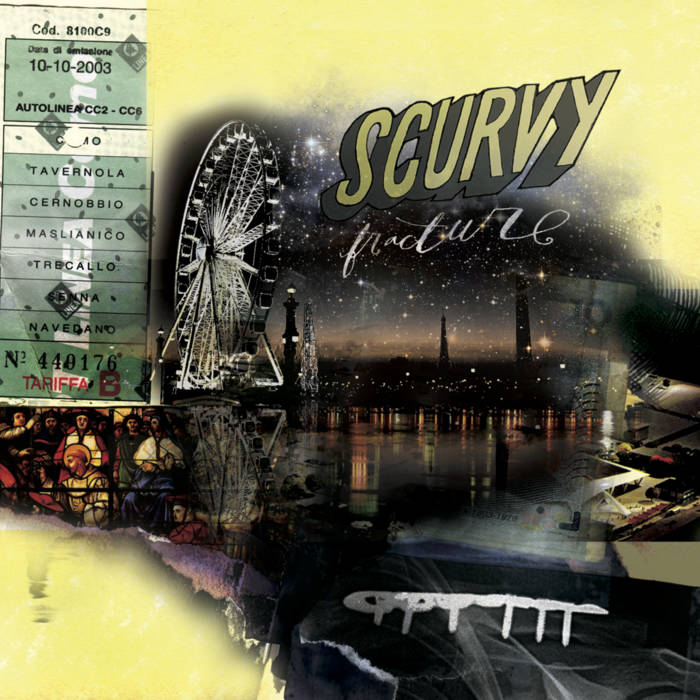 Available for purchase at hi4headrecords.com/catalogue.html#scurvy

"Scurvy’s Fracture reviewed in the November 2010 issue of All About Jazz:

The band’s extensive road experience is evident in the cohesion with which they run through the material. Prog-heavy moments like “Jenny Found a Hole” or “Half-Brain” contrast with the improvisational abandon of “Snow Caine” or “Side A Is Dead”. “Chime In” seems to spit the difference to great effect, sounding something like the defiantly unkempt offspring of Captain Beefheart, Henry Cow and Slayer. The Henry Cow comparison is perhaps most notable on “Inversion”, Butler’s melody floating above a dizzying rhythmic construction, as things inevitably explode into a frenzied free improvisation before returning to the theme.

The lion’s share of the feature spots ends up going to Caine and Snow (often playing a heavily distorted amplified trombone). Butler’s role here is a bit subtle in this very un-subtle music: with a recent superb solo release demonstrating his incredible saxophone playing, in this project he sticks closer to his melodies, allowing the band to put more of their personal voice into the mix. Nazary’s unaccompanied introduction to “One, Two, Three” is a visceral excursion, effectively set up by the preceding introspective drone piece “Irradiance”. Butler’s saxophone solo on “One, Two, Three” floats euphorically above the thicket of pounding bass, fractured guitar chords and propulsive drumming. The maze-like hocketing in the closer, “QNG”, rises and falls, opening up to a great trombone solo, phrases tossed off in various directions as things transition to a blazing Caine/Butler duo. Throughout, Wimbish’s bass grounds things with both structure and fluidity. The entire band gradually fades into the distance, leaving only a reverb-laden melody that ultimately fades as well.”

Bandcamp Daily  your guide to the world of Bandcamp